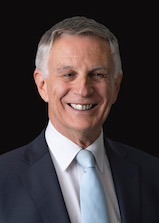 Tony is a historian and member of the board of a leading Independent school in Adelaide. In 1989 he co-founded Eynesbury College, a specialist, pre-university school,  and served as either Co-Principal or Principal until stepping down in December 2007.

He has a longstanding interest in international education and has consulted on governance issues to the Association of Independent Schools of South Australia. Until 2017 he chaired the academic boards of two Adelaide-based tertiary institutions.